The Wolves placed third out of 20 teams at the District 4 championships, just missing out on a trip to the state meet.

Senior and team captain Hayden Harris made his fourth cross country season his best. Harris was a freshman on the team that resurrected the program by coach Rob McCallum in 2019. Fellow senior Isaiah Bloom carried momentum from track season last spring in joining the team.

Freshmen Trenton Ladd (rookie of the year) and Drew Sawyer (most improved) give the Wolves a bright future.

Days Creek also added a middle school program in 2022, coached by David Hunt. Ty Sawyer, Asher Meisner, Boe McNeely and Jude Sawyer competed for the Wolves.
Cross Country  Recap (2021-22 school year)
The turnout was low for Days Creek cross country in the fall of 2021, but there were still highlights for the Wolves on the running paths.
Siblings Hayden and Natalie Harris made up the high school roster. The addition of Gage Hart to the halls of Days Creek sparked the addition of a middle school program.  Hayden Harris improved his 5,000-meter personal record by four minutes (26:14) from his freshman year. He finished 35th at the District 4 Championships. Natalie Harris ran the fourth-fastest 5K time by a Days Creek female ever, in 27:10. Hart was one of the fastest runners in the Little Fir League.

The team hosted the inaugural Days Creek Relays, where teams of three runners ran legs of 3,000 meters, on its newly completed fitness/nature trail. The Wolves will be back at it again this fall, hopefully with more runners. 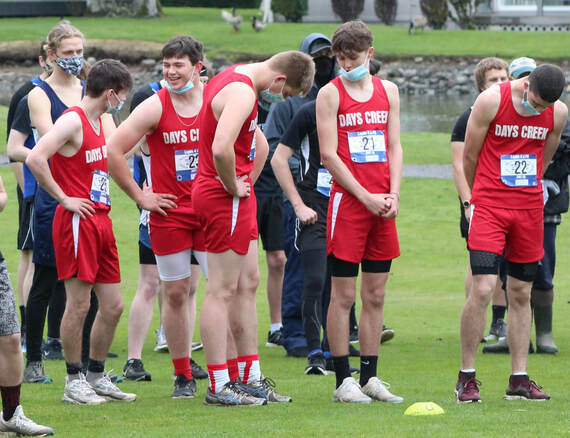 Cross Country  Recap (2020-21 school year)
The 2020-21 cross country season at Days Creek was unlike any other. Delayed by months because of Covid-19, athletes had the added challenge of required masks while running. Our entire roster was made up of two-sport athletes, meaning runners showed up for jogs having just complete football practice. Our meets were often the mornings after football games.

Throughout it all, the Wolves produced one of the best boys seasons in school history, nearly qualifying for the state championships as a team and sending senior Malachi Gibson as an individual. Gibson joined the short list of Wolves to make it to state, finishing 30th out of 111 runners in a personal best time of 18:40 over the 5,000-meter course.

Days Creek hosted its first cross country meet since the 1970s and our boys won against North Douglas and Oakland. We blazed a trail on campus to make the meet possible, and we have plans to improve it using an OSAA grant we were awarded this year.

All our runners -- Gibson, Neston Berlingeri, Zane DeGroot, Cauy Jackson and Rhyse and Jackson Williams -- were competitors and embraced challenges even if they didn't look like prototypical distance runners. And all were seniors, so the 2021-22 season will be a completely new chapter for the Wolves. I can't wait.